To make sure our public schools are strong 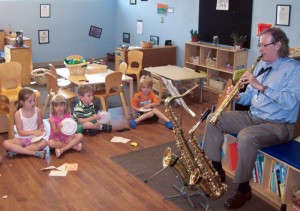 Bob Byrd shares music with the children at the ARMC Family Enrichment Center.

Bob became motivated to run for Alamance County Commissioner when serving on the ABSS Vision Plan Committee during the end of his career at Alamance Regional Medical Center during 2012-13.

“I always was aware how dependent the success of a community was on a strong foundation provided by a strong system of public education,” Bob says.  “I grew up in an environment that emphasized excellent schools.”

Bob also observed how local schools played into the decision of prospective physicians he was recruiting to live and practice in Alamance County.  “We lost many excellent physicians because they thought it would be better for their children to live somewhere where schools were thought to be better,” Bob observes.

While working with the ABSS Vision Plan Committee, Bob became acutely aware of the challenges incurred by the Alamance Burlington School System due to inadequate funding from the County.  “I wanted to be in a position to do something about that,” Bob says.  “While there has been progress, there’s much more that needs to be done to support and strengthen public education.”

To make sure our county government is working for everyone

Bob wants to make sure that the county’s skilled and loyal staff are doing their jobs professionally and are supported accordingly.  He knows that a motivated and engaged staff is the most efficient and effective way to carry out important work.

“At ARMC, we worked hard to create a work environment that attracted and retained the best staff, from people who provided direct patient care and dealt with life and death situations to others who supported direct care staff and the organization overall,” Bob says.  ARMC received several awards for being a great place to work.  “Our local government should be no different,” Bob says.

Bob also is motivated to continue his first-term work around initiatives dealing with health, mental health, and disparities:

To make sure we have good, high paying jobs while protecting our environment and preserving our farms

A supporter of economic incentives to attract and retain high paying jobs and to expand the county’s tax base to keep tax rates in check, Bob knows we must balance industrial growth with protecting our natural and agricultural resources.  “Our county is rich with parks, trails, waterways, and farmland that help define who we are,” says Bob.  “We need to make sure that future generations can enjoy these resources.”

Additionally, Bob understands the importance of our local farmers on our economy, our community’s sustainability, and the health benefits of consuming locally produced fruits, vegetables, and meats.

As commissioner, he was an active participant in the Voluntary Agriculture District Board meetings and voted to provide county funds for the Farm Preservation Program. “Our society is losing farmland at an alarming rate,” says Bob. “Once it is gone, it is gone forever.”

“Given that I’ve dedicated most of my adult life to improving the quality of life for everyone in Alamance County, whether through my career or my community service, I view being elected once again to public office on the County’s governing board as a continuation of that service.  I never considered myself as a politician and I never aspired to be elected to public office until I was getting ready to retire while serving on the ABSS Vision Plan Committee.  Then, I saw that I could make a difference for our schools and our youth as a commissioner.”

“Unlike other candidates, I have no desire to make politics a career or to serve in any position, now or in the future, other than on the governing body of the county I love.  This is where I’ve invested most of my life.  I’ve been recruited to run for state office and other positions, but I’m not interested.  I do not need to hold an office just for the sake of holding an office.  My only desire is to serve the people of Alamance County, in Alamance County.”